The operating building of Mondelez, erected in the 60is, was awarded for the best thermal-energetic refurbishment. The certificate for the best energy concept for new buildings was given to “Trotec – the Zero-Energy Building”. EcoProjekt was responsible as constructional engineer for architecture, building services, energy engineering and statics and was further able to successfully gain subsidies for both buildings.

In Austria ÖGNB – Österreichische Gesellschaft für nachhaltiges Bauen – awards the national GreenBuilding Certificate for industrial buildings. ÖGNB is the National Contact Point for the EU GreenBuilding Initiative. The award honours the increase of energy efficiency and the integration of renewable energy sources in facilities engineering. 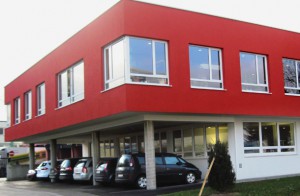 The old office building, which was erected in the 60is, was refurbished with the exception of the carrier structure and the exterior walls were dismantled.

An extension to the building created further office space as well as a roofed parking space. The entire building obtained new premium windows and a green roof for better insulation.

EcoProjekt updated the evacuation routes and fire prevention concept. The building has a barrier-free entrance, an outdoor space, which can be used for meetings and breaks during the summer, as well as a designated parking space for bikes and bicycles. The interior was refurnished for a contemporary working environment with a new floor plan to guarantee more transparency.

The performance of the lightning was reduced from 22 to 8 W/m2 by the installation of LED technology. An efficient heating and cooling system with optimised and simple control was installed. The heating demand was reduced by 75%, the cooling demand by 90% in comparison to the old building. The heating of the supply air with an air-heat pump gains an energy saving of around 190,000 kWh/a, the heat recovery from spent air around 130,000 kWh/a. 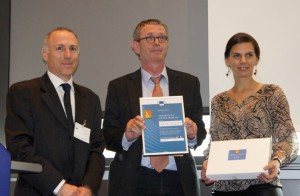 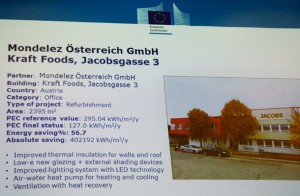 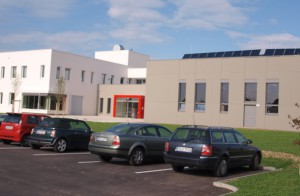 The new building was conceptualized for operating energy-self-sufficient. It is a massive construction with ideal insulation and activated building components.

The entire heating demand (200,000 kWh/a) is covered by the interaction of warm-water-solar system, underground storage as well as an extinguishing water tank. The entire cooling demand (130,000 kWh/a) comes from the groundwater. Coolness of the water is used for a surface cooling via a well-water cooling system. The air exchange is controlled by a room ventilation system.

The entire electricity demand (50,000 kWh/a) for the heating and cooling system – geo-thermal heat pump, water-water heat pump and circulation pumps – are provided by an Austrian photovoltaic plant. The building produces therefore energy worth € 40,000 per year.

LED lighting is provided nearly in all areas of the building: offices, R&D, storage space, emergency lighting and outdoor facilities. 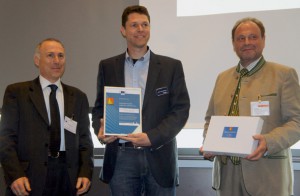 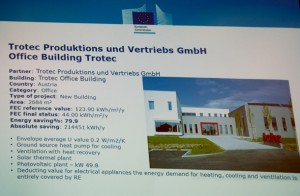